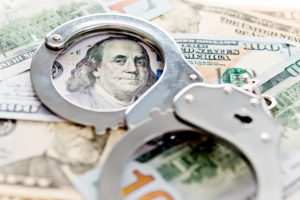 In Florida, prosecutors take money laundering very seriously, and a conviction can have long lasting consequences. Generally, money laundering involves a financial transaction scheme aimed at channeling funds that were made from unlawful activities into legitimate resources while concealing the identity, source and destination of the ill-gotten gains. Although these are nonviolent offenses, anyone accused of money laundering faces a lengthy prison sentence and significant fines.

Herman Law. P.A. routinely defends clients against money laundering charges in Ft Lauderdale, West Palm Beach and throughout South Florida. If you have been charged with a white collar crime, our dedicated attorneys will work to protect your freedom and your reputation.

What is money laundering?

In addition, money laundering is often connected to other crimes including, but not limited to:

Although the process can be complex, money laundering generally involves three phases:

Money laundering is a felony offense and the severity of charges depends on the value of the transaction. Penalties at the state level include:

Although money laundering can be either a federal or a state offense, federal charges and penalties are more severe. A conviction for federal charges is punishable by up to 20 years in prison and fines up to $500,000. Moreover, the government can seize or freeze assets such as cash, bank accounts, real estate, automobiles or other property connected to a criminal enterprise and these assets are subject to forfeiture.

At Herman Law, we have extensive experience defending clients against money laundering charges. In order to be convicted, the government must show that the defendant was aware of the unlawful source of funds and that he or she understood the transaction was intended to conceal detection of the proceeds that were obtained from the criminal activity.

We can design a defense strategy to demonstrate that there was a lack of intent to commit the crime, and that our client was unaware that the money was obtained from unlawful activity. Our attorneys may also be able to prove that were was no intent to conceal the funds, or that our client was under duress, such as the threat of harm, for not participating in a crime.

Our firm has the skills and resources that are necessary for winning an acquittal and routinely collaborates with a network of respected forensic experts to build successful cases. If you have been accused of money laundering, your freedom and your future hang in the balance. Call our office today for a free consultation.